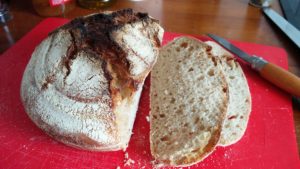 As any opera singer will tell you, it’s important to have stuff to do to keep you sane while you’re away from home. Some knit, some watch a lot of sport, some paint… I used to paint, but since the restrictions on liquids in hand luggage, the packing of my kit has become too complex. And besides, if you get carried away with it, you end up with a pile of paintings that, somehow, you have to get home again. Taking arty photographs has become a lot more appealing than lugging canvasses.
I find that having something creative to do away from the rehearsal room is a good release valve, often because, frankly, too often the “creative process” in rehearsal is anything but. Commonly it is frustrating, confusing and stifling. Oh and let’s not forget boring too. Making something of your own can let off the creative steam.
Aside from writing drivel such as this, I like to bake sourdough bread. Not only does it burn off the creative fuel, it literally feeds me too. It’s probably the most genuinely creative thing I do. But if you think I’m going to use the word “artisan” anywhere in this blog, think again. The only downside to baking bread is that you enter a whole new world of hipster-poseur bollocks. I suppose every craft has its share of twats who love to show you the size of their expert willy, but dough-heads seem to be worse than most, droning on about hydration levels and protein content. Not only do many of them talk a load of tosh, some of them can even make you think it might be more fun to hang out with some trainspotters for a few hours.
The first time I baked “on the road” I was working at Glyndebourne, staying in a tiny studio in someone’s garden. Fresh from a baking course, I brought all my equipment in the car: sourdough starters, digital scales, scrapers, tins, bannetons (proofing baskets), French slashing knife (a lame)… It was a lot of stuff. It wasn’t long before I realised I was going to have to figure out how to keep up my baking without lugging around half a ton of equipment, especially when going abroad.
I think I’ve finally cracked it. First to go were the scales. I reckoned that bakers of old managed perfectly well without measuring everything to the nearest gram, so surely there must be some leeway. Experience and a lot of practice has now taught me what will produce a good loaf, and if they’re not always showroom quality, they’re never inedible, so there’s plenty of room for small mistakes. One is, after all, baking a loaf of bread, not creating the Holy Grail.
Also gone are the tins, bannetons and special knife. The last one was easy. A bread knife works really well instead. For non-bakers, it is important to slash the surface of the dough before you bake so that the bread can expand properly while it’s baking. If you don’t it will certainly split open, or worse, become constricted.
Instead of scales, I use cups, which you find in most digs or can pick up for a couple of quid. I’ve found that as long as the proportions are right, you’re OK. After a while you get used to the feel for a good dough and can add more water or flour as need be. And one teaspoon of salt for a small loaf does the trick. (For sourdough innocents, there’s nothing else in a loaf but starter (a soupy fermentation of flour and water) flour, water and salt.)
The big challenge is proofing. Normally, you bung your dough in a special basket, cover it and let it rise, before turning it out and baking it. It’s a delicate process but produces a loaf with lovely, distinctive rings on the crust, and it’s definitely the best way to do it. But it’s not the only way. I’ve found you can make a good bread by proofing the dough in a mixing bowl. Then you turn it out very carefully, upside down, onto a floured surface like a fat pancake. This you fold in half with as little disturbance as possible, rather like an omelette, before sliding it onto a baking sheet, slashing and baking. For this you need a bit of nerve and a good plastic scraper, the only piece of kit I really have to take on my travels. The other thing I like to pack is a hotel shower-cap, which is very handy for covering bowls.
The biggest challenge has been packing my sourdough starters, both wheat and rye. Travelling to the States I worried that a porridge of flour and water would throw US Customs into a tizz, guns un-holstered, “move away from the porridge, punk!” and all that malarkey, but the first time I tried to declare them they weren’t interested. Now, just to be safe, I put about a heaped teaspoon’s worth of thickened starter in tiny make-up pots and put them in my toiletries bag. When I’ve landed I nip to the nearest supermarket, buy some flour (and some tupperware pots if need be) and revive my little bubbling babies. It’s the bread-making equivalent of Ant Man.
Here in Brussels I have only a small combi oven to bake in. But, luckily, there’s also a heavy cast-iron casserole, great for baking, and I’ve had some great results. For proofing, I’ve been using some cheap cardboard “party salad bowls” I spotted at a local supermarket. So, eat that, “artisan bakers”.